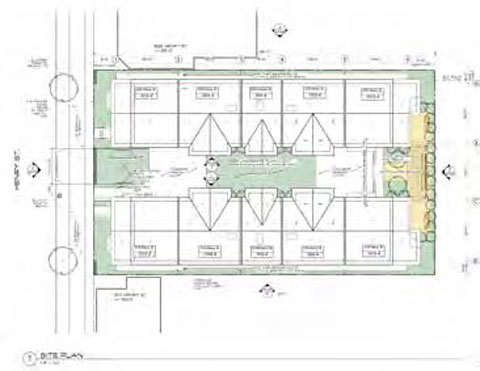 squarely within the definition of a mews, a term originally used to describe back streets often fronted by stables and servant’s quarters, where pedestrian life is of equal importance to vehicular use. In a modern adaptation of this typology, TDA designed Henry St. Mews as a double row of four two-bedroom townhouses fronting on a central mews. Essential to the success of this type is the quality of the space between the buildings: that is, the mews. Garage entries are clustered such that they alternate rhythmically with paired pedestrian entries fronting onto turfstone and planting areas, creating truly usable, livable space.

Located in Oakland’s earliest settled neighborhood, the buildings are designed and detailed to strongly evoke West Oakland’s predominantly Victorian housing stock. Henry St. Mews experienced a beneficial revision during design development due to newly enacted state legislation that provides density bonuses and development standard relaxations in exchange for the provision of affordable housing units. Making use of this law for the first time in Oakland, TDA worked closely with the developer, planning department and city attorney to a favorable conclusion, resulting in a unanimous approval from the Planning Commission. This legal innovation added two 1-bedroom units to the project—an increase of 20%— without adding extra parking spaces due to the site’s proximity to BART.