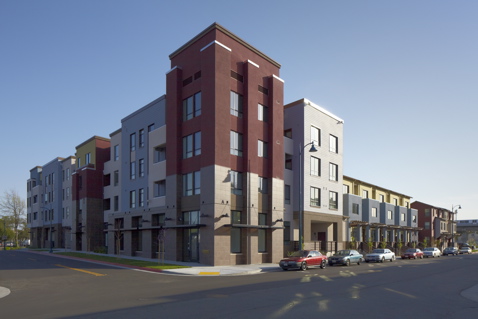 TDA’s work at Lion Creek Crossings is the fourth phase of an effort to replace the blighted Coliseum Gardens public housing project. The funding comes through a federal program called Hope VI, originated in 1996 as a collaboration between the Congress for the New Urbanism and the U.S. Department of Housing and Urban Development. The intention of Hope VI is to replace the nation’s most dangerous, dysfunctional public housing projects with pedestrian scale, walkable, humane communities for those who can least afford market rate housing. Lion Creek Crossings IV stands to become even more affordable than its government subsidies suggest: it is immediately adjacent to and will be an integral part of the Coliseum BART Transit Village. Studies have shown that low income people who must depend on automobiles to get to work spend up to 40% of their income on transportation. Ready access to mass transit and buses should go a long way toward helping the residents to realize additional benefits in the form of affordable living, not just affordable housing.

The client’s original sketch design for the project, occupying entire city block, consisted of a podium covering100% of the site, with four story buildings at each end and townhouse units on the sides and atop the podium. When TDA took on the project, significant changes were proposed and accepted by the client. Employing the Parklift pit system, TDA was able to cut the size of the podium by almost half, thus allowingthe remainder of the site to be on-grade landscape for the enjoyment of the tenants. The compressed parking volume enabled by the Parklift enabled TDA to design stacked, nesting liner townhouses along the sides of the parking garage, presenting a pedestrian-friendly front to the street. The four story building at the north end of the project faces Lion Way, a newly created street that is intended to be a gateway to the transit village for Lion Creek Crossings residents. Consequently, that portion of the building is the most urban in nature.Transitioning down past the liner townhouses that address both the street and the podium courtyard, the lower garden is surrounded by on-grade townhouses that, while they can be accessed from the rear through patios off the garden, specifically address and activate the street at their main entries, porches and stoops.

Lion Creek Crossings promises to be an exemplary project within the Hope VI firmament, providing individual street entries to the majority of residents, highly designed internal open space, a street-enlivening presence on all four fronts, and a design that takes full advantage of the walkability promised by the Coliseum Transit Village. The high quality design and execution throughout this project would not have been possible without the able project leadership of Theresa Dias and her emerging firm, Struthers Dias Architecture. 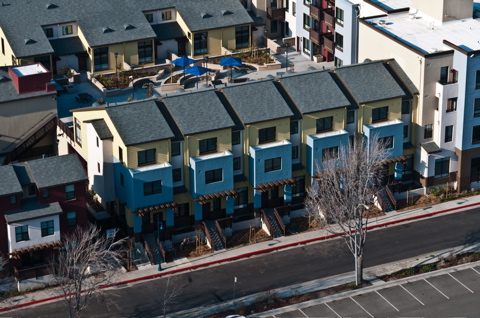